In 2016-2017 the ‘Joseph Plateau’ was mobilized to the Port of An Ping to execute one of the largest scopes the vessel has executed so far. The vessel installed over 500,000 tonnes of rock to stabilize a pipeline.

Due to frequent earthquakes in the area the soil around the pipeline is subject to erosion. The pipeline was installed on a depth of approximately 110 m but due to the earthquakes the seabed was eroding to water depths below 130 m and the deeper sections were approaching the pipeline with every new earthquake. Rock material was produced by our local partner Hung Hua and delivered to the port of An Ping where it was loaded on board of the ‘Joseph Plateau’ and installed next to the pipeline to guarantee the stability of the pipeline and to halt the erosion. 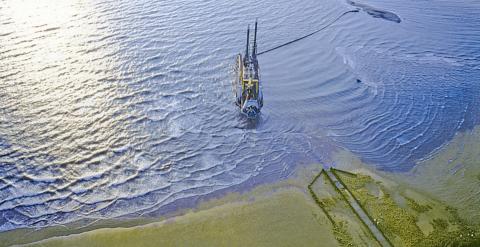