The VRT, the Flemish Public Broadcaster, has selected a partner for the construction of the new VRT house in Brussels. The current building is more than four decades old. The VRT wants to continue to be the best possible public broadcaster and a brand new building will help us prepare for the future. The contract has been awarded to the construction team consisting of OFFICE Kersten Geers David Van Severen, Jaspers-Eyers Architects, Bureau Bas Smets, Tractebel, CES, Ideal Acoustics, Willemen Construct, Jan De Nul Group and EEG.

Under the name VRT Morgen (which translates as VRT Tomorrow), they are joining forces to realise the creation of the new VRT house to which the public broadcaster will move in the summer of 2026. The new media house focuses on flexibility and cooperation with meeting places where the VRT employees can come together, playing a key role. It is a compact and accessible building consisting of two stacked volumes. The building has a ground floor with a mezzanine and only three upper floors comprising an area of 87 x 87 m. A green environment enhances both the inside and outside of the new VRT house.

The candidacy for the new-build project, which is part of the transformation of the Reyers district and the realization of mediapark.brussels, started in February 2020. Seven construction teams submitted their candidacy via a Design & Build formula. In the period preceding the final decision, a competition dialogue was held with a number of candidates. Based on these predetermined award criteria, the Board of Directors and the management of the VRT opted for a definitive award to the VRT Morgen construction team. The contract was awarded a little over a year ago with a maximum construction cost of EUR 133.5 million. VRT Morgen will realize the building for a construction cost that is well within the specified contract budget.

“The VRT has opted for a good, strong design that underlines its position as the largest cultural institution in Flanders. During the first discussions about the new building, it was immediately decided to stay in Brussels. The VRT remains attached to the capital and thus strengthens the bond between Flanders and Brussels. ” Luc Van den Brande, Chairman of the VRT Board of Directors

With the new management agreement the VRT is ready to face the future and this building is the perfect house for this.

“With the realisation of the new building, our public broadcaster is taking another big step towards the future. A modern media company deserves the most optimal infrastructure. The new building will become the reference point within the Brussels media hub. On the legendary Reyerslaan, next to the well-known tower, there will be a modern and sustainable media building that responds to the most recent evolutions in the media world. It is clear that the VRT will change dramatically in the coming years. The impetus was given in the new management agreement; the change will also soon be very visible with the new building. It will also be a pleasant and modern workplace for VRT employees and partners.” Benjamin Dalle, Flemish minister for Brussels, Youth and Media

“The new VRT house is a high-quality building that fully meets contemporary architectural expectations. The building fits perfectly into the urban context and the environment of the Reyers site. ” Kristiaan Borret, Brussels architect

"A building that stimulates our new way of working together"

The new 65,000 m² VRT house - of which 40,000 m² is above ground - will remain on the current site in the Reyerslaan and is described as a horizontal building with two stacked volumes. The first octagonal volume is a base consisting of a spacious lobby, many meeting places for employees and visitors and three large television studios. Above this is the second volume, the work area, consisting of just three floors. Each floor comprises an extremely spacious work floor, a square measuring 87 mx 87 m, where collaboration is key. The VRT is a creative house and in the future it will be possible to create content very easily on any office floor. Flexibility and media creation go hand in hand. In terms of accessibility, the new VRT house strives for an A ++ label, which stands for a building that is highly accessible to both visitors and employees.

“We have opted for a horizontal building that promotes a new way of working together and breaks silos between our departments,” said VRT CEO Frederik Delaplace. “Our people will literally work together on large work platforms that can respond flexibly to how media will evolve in the coming decades. The building forms a new living environment for the employees: a place where creation and interaction are central and where we can create media everywhere. ”

A sustainable building with five inner gardens and a limited footprint

The new VRT house is a compact building, integrated into the natural environment and with a limited ecological footprint. On the one hand, the construction project has opted to preserve as many existing trees as possible and, on the other hand, the new building is 100% free of fossil fuels. An insulating building shell is used and the building is fully heated by means of recuperated heat and heat pumps. A further 2,300 m² of solar panels are installed on the roof to support the electrical installation.

Indeed, the VRT has literally opted for a green building with five large inner gardens and adjoining terraces. The combination with the trees and the park makes this a distinct green environment, both inside and out.

Relocation planned for the summer of 2026

The construction team aims to get started as soon as possible. In the coming months, VRT employees will be closely involved in determining how the brands and departments will spatially relate to each other. In the meantime, the dossier is being prepared for the application for the building permit. The exact start date of the works will be determined once this permit is issued. The goal is to move in the summer of 2026.

Renders of the new VRT House 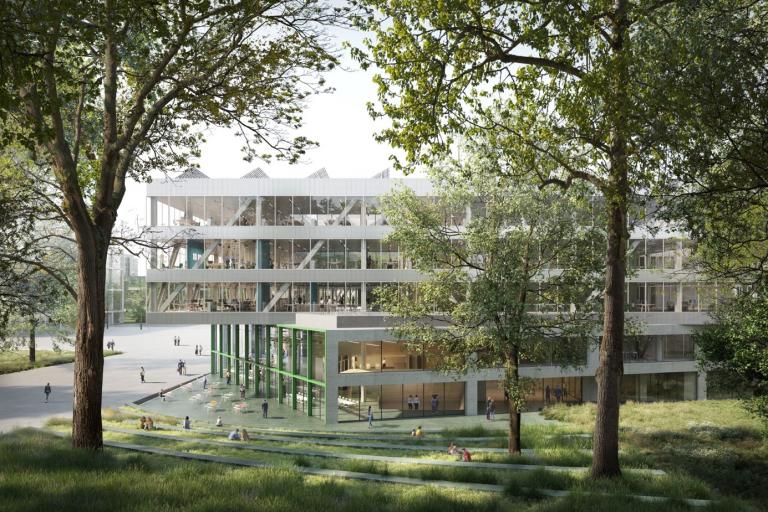 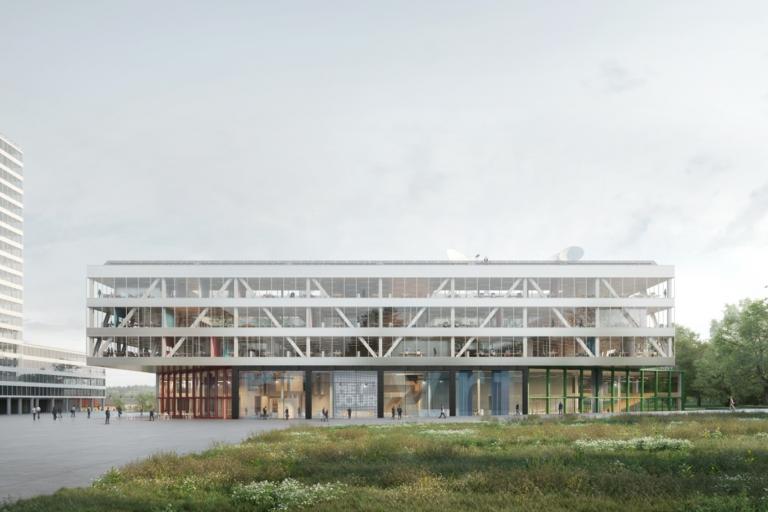 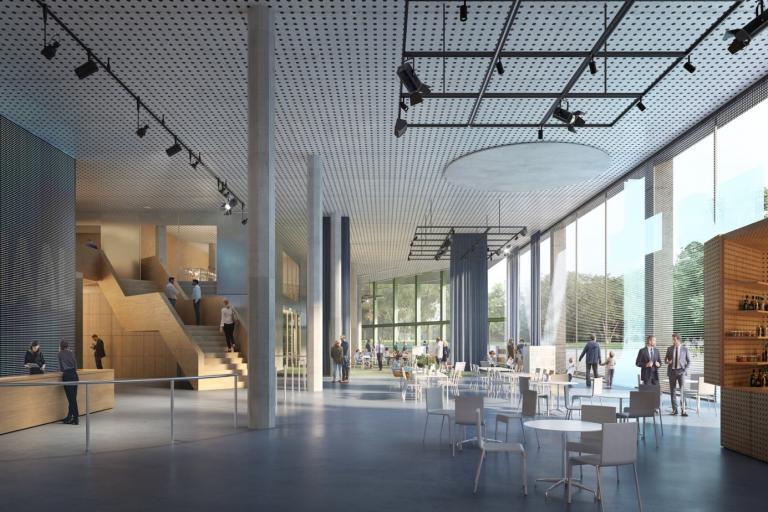 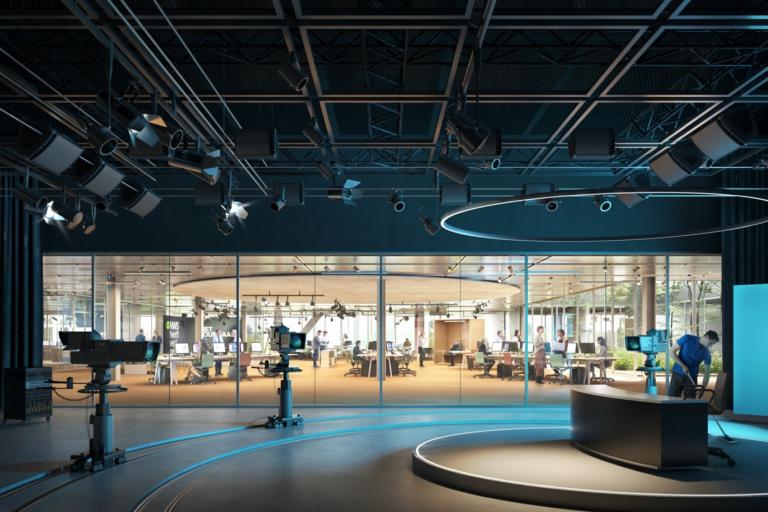