Skip to main content
By 2030 the water level will have risen by 30 centimetres and we can expect increasingly intense storms. The future of the next generations depends on the actions we take now. JDN does not only take its responsibility and do everything to reduce emissions, we are also preparing our society for the challenges of tomorrow, with Nieuwpoort as the epicentre of our efforts. An impressive storm surge barrier, necessary maintenance dredging work in the port, an ecological site office... We are preparing the coastal municipality for the future.

Storm surges that occur only once every decade, a 1,000-year storm and a rise in sea levels by half a metre by 2100. The storm surge barrier is intended to guarantee the continued existence of Nieuwpoort. And JDN is happy to help. "The barrier is part of a series of government measures to protect 67 km of coastline", explains Arnold Feys. As project manager, he must ensure that the barrier is installed correctly, within the planned schedule and budget.

"More than 85 percent of the polders are less than 6 metres above sea level. In the event of a storm that raises the water level even further, the hinterland will flood", says Arnold. "We are currently using sand bags to protect this area, but the storm surge barrier will make this redundant. At high tide, the water level reaches 5 metres. Combined with a heavy storm, the level can even rise to more than 6 metres, which is no less than one and a half metres higher than normal. At that moment, the barrier comes into operation and stops the water from flowing. This is also necessary because such a storm occurs twice a year. We are even prepared for a rise of up to 8 metres, but such a severe storm can only occur statistically once every thousand years." Yet this is not the only moment when the barrier will be active. Once a year the structure will be put into maintenance mode and a test closure will take place every two weeks.

The steel barrier rotates between two cast iron shafts anchored in a concrete abutment. The two abutments are connected to the banks of the IJzer. JDN is currently working hard on the construction of the first abutment. In order to ensure a smooth passage of shipping, a free passage width of at least 35 metres is respected between both sides.

"For the cofferdam we placed a combi wall (a combination of tubular piles and sheet piles, editor’s note.) This consisted of no less than 53 piles 31.5 metres long and 42 tubular piles 21.5 metres long, necessary for the abutment's foundation. We then emptied each tube. Since there were so many obstacles, we were often only able to dredge one tube per day. Afterwards, we partly filled the pipes with concrete. After pouring a layer of underwater concrete 2 metres thick, we were able to empty and clean up the entire construction pit. Finally we burned down the foundation piles and realized the floor slab of 3 meters of reinforced concrete in dry conditions.

In 2020, the pile driving works on the right bank will start and the construction of the other abutment will follow. In the spring of 2022 the concrete threshold will be placed. A feat, according to Arnold. "The threshold weighs 4,500 tons and will be built in the autumn on an immersion pontoon in Ostend. The colossus will be transported to Nieuwpoort by sea. Approximately 3 hours before high tide we can start entering the threshold to its location in the IJzer estuary; otherwise the water level will be too low. As such we have about 6 hours to position the threshold above the previously realized zinc trench – the connection between the two abutments. In parking position, the barrier will be deepened in this concrete threshold."

At the beginning of 2024, the steel barrier of 1,300 tons will be installed in its entirety. The construction will be made in Spain and transported to Nieuwpoort by pontoon.

For the construction of the storm surge barrier Jan De Nul Group is working with Herbosch-Kiere. In this integrated Temporary Company, each party will have realised 50 percent at the end. But both the preparation as well as the construction and installation will be carried out jointly. JDN's engineering department is carrying out the study and drawing work and the formwork.

"The collaboration is running smoothly and there is a lot of mutual respect," explains Project Manager Arnold. "This leads to great initiatives. Together with all parties we have created an experience space, where children can learn about the storm surge barrier. There is even a simulator where they can see the barrier in operation.” 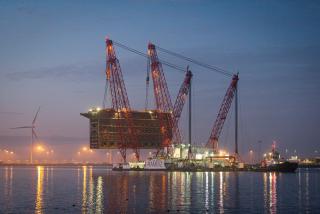 Impressive spectacle in the port of Zeebrugge 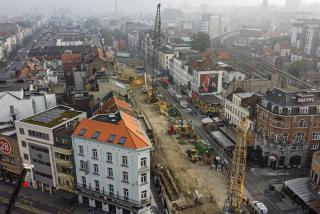 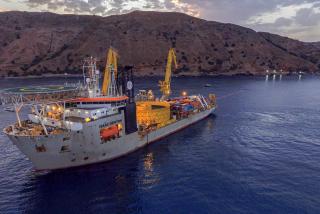 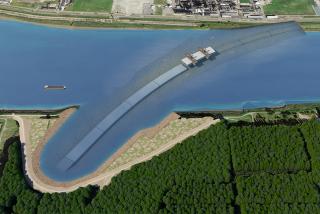 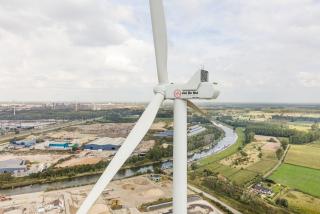